Why do we celebrate Bible Month in September? 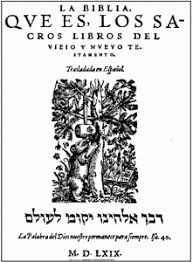 On September 26, 1569, the printing of the fully translated Spanish Bible from the original Greek and Hebrew languages was completed. This Bible was called the “Bear Bible” (named after the bear that appears on the cover). It was translated by Casiodoro de Reina. On that occasion, 260 copies were released in Basel, Switzerland. It has been 452 years since that event.

The Bible is the name we use to refer to the Word of God. This Bible is not a single book, but a collection of ancient writings. 66 separate books, written over approximately 1,600 years, by at least 40 different authors.

“Bible” comes from the Greek word (plural) Biblión / Biblos, which means “The books” or “The Little Books”. Byblos was a major trading port in the Eastern Mediterranean where papyri and other writing materials were purchased.

In the first century it was written on papyrus, which was obtained from the plant of the same name. Papyrus scrolls were the most important mediums for the transmission and preservation of human knowledge.

Only centuries later parchment would begin to be used, made up of animal skins, which, properly treated, were reduced to thin and smooth sheets. At first, papyri were used in the so-called “roll” format. It was only written on one side and it had to be unrolled until the desired place to read it. The Jewish people had the Torah written on scrolls.

The story of “the Bible” begins with the Jewish Scriptures. The historical record of the Jewish people was written on leather scrolls and tablets throughout the centuries, and the authors include kings, shepherds, prophets, and other leaders.

Later, Christians began to use the codex format, which is like current books. It is written on both sides, binding the papyri like current books. The practical advantages were obvious: it saved papyrus, since it was written on both sides; it had a compact format and would often fit in a pocket; it was easy to use with the ability to quickly browse for a reference; it was easy to store and also to hide in times of persecution.

The Bible was written over a period of nearly 1,600 years by 40 authors. The authors wrote from 1,500 years before Christ to 95 years after Christ.

The first five books are called the Law, and were written and/or edited primarily by Moses in the early 1400s BC. Soon after, other books of scripture were written and compiled by the Jewish people for the next 1,000 years. Around 450 BC, the Law and other Jewish Scriptures were organized by councils of rabbis (Jewish teachers), who later recognized the entire body as the inspired and sacred authority of God (Elohim).

It is important to note that most of the authors did not know each other, because they lived in different times and places. Despite that, the theme of the Bible is the same. For example, Moses, the author of Genesis, did not know David, the author of the Psalms, and David did not know Paul, who lived some 30 years after Christ.

One could say that the central theme of the Bible is found in the words of Jesus described in John 3:16, “For God so loved the world that He gave His only begotten Son …”.

Although the Jewish Scriptures were copied by hand, they were extremely faithful copy by copy. The Jewish people had a phenomenal system of scribes, who developed intricate and ritual methods for counting letters, words, and paragraphs, to ensure that they did not make copying errors. These scribes dedicated their entire lives to preserving the accuracy of the holy books. A single copy error required immediate destruction of the entire roll. In fact, the tradition of Jewish scribes was maintained until the invention of the printing press in the mid-1400’s. As for the accuracy of the manuscripts, the discovery of the Dead Sea Scrolls has confirmed the extraordinary reliability of this scribe system over thousands of years.

The Bible as we know it now, has two main divisions, the Old Testament, or old covenant, which has 39 books of five divisions and the New Testament or new covenant with 27 books of four divisions; a total of 66 books make up the Bible.

Originally written in the Hebrew language. It has five divisions by subject or type of literature:

Originally written in the Greek language. This division is split into four sections, by subject or type of literature. These sections are: The Gospels, The History, The Letters, and The Prophecy.